Last month (April), we asked our CE Plus members, “Who is your favorite fictional real estate agent?” The winner was Phil Dunphy from Modern Family with 62.5% of the votes. Keep reading to learn what other TV real estate agents made the list.

Who is your favorite fictional real estate agent?

Phil Dunphy (played by Ty Burell) is the lovable dad/real estate agent from Modern Family who steals just about every scene that he is in with his hilarious one-liners.

Everyone knows the famous “Always Be Closing” quote from Blake (played by Alec Baldwin) in Glengarry Glen Ross, which many people may not know was originally a Broadway play written by David Mamet.

The Hammonds from Santa Clarita Diet (6.25%)

Sheila and Joel Hammond (played by Drew Barrymore and Timothy Olyphant) are two married real estate agents in Santa Clarita, California, one of whom also (plot twist) happens to be undead and must devour humans in order to stay alive.

Evelyn Harper (played by Holland Taylor), real estate agent and the mother of Charlie Harper (played by Charlie Sheen), made every episode of Two and a Half Men that she appeared in highly entertaining with her quick wit and brutal honesty. 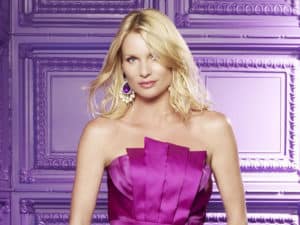 Edie Britt (played by Nicollette Sheridan) is the desperate housewife that you love to hate on the TV phenomenon, Desperate Housewives.

Would you agree with these results? What other fictional real estate agents would you add?